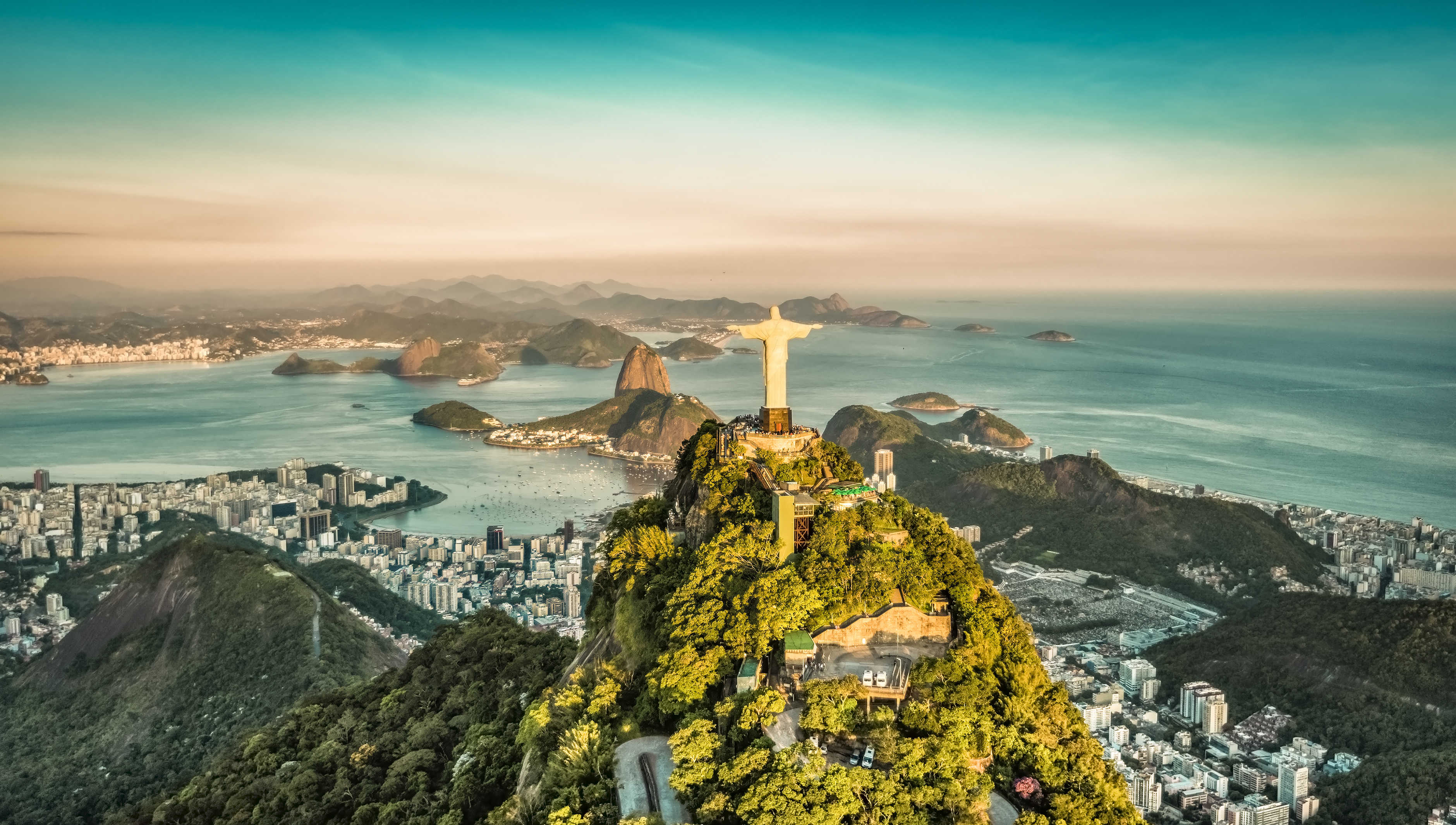 Brazil is a country blessed with it all – powdery white sandy beaches, breath-taking rainforests and thriving, bustling cities. It’s attractions extend from colonial towns that seem to be frozen in time, tropical islands and otherworldly landscapes of mountains and waterfalls, as well as a national culture that embraces good food, great music and fabulous festivals and parties.

Often described as one of the world’s most captivating countries, Brazil offers something for everyone. The official language spoken in Brazil is Portugese.

With so much to do and see here are some of the top places to visit while travelling throughout Brazil.

Pão de Açúcar
Seen from the peak of Pão de Açúcar, Rio is undoubtedly a Marvelous City or as the locals describe it – Cidade Maravilhosa. There are many good times to make the high ascent, but sunset on a clear day is the most rewarding described by many travellers. Two cable cars connect to the summit, 395m above Rio. At the top, the city unfolds beneath you, with stunning views of Corcovado mountain and Christ the Redeemer off to the west, and Copacabana Beach to the south. Be prepared for heavy crowds however and if possible, go first thing in the morning – and avoid going on cloudy days as this will impact the view and photo opportunities!

Parque Nacional do Iguaçu
Brazil’s second-oldest national park, it was created in 1939 and protects one of South America’s most magical and majestic sights, Iguaçu Falls. Iguaçu Falls form part of the largest waterfall system in the world. The 1200m-long Waterfall Trail (Trilha das Cataratas) is one of Brazil’s premier natural experiences with a series of islands cut the river into waterfalls along the path culminating in a magnificent display of nature at Garganta do Diabo (Devil’s Throat’).

Copacabana Beach
You can’t think of Brazil without thinking of the breathtaking Copacabana Beach. Extending for some 4km, the beach is a bustling mix of locals, tourists, music and food. On Copacabana Beach the locals separate themselves out into different sections depending on their activities, and is despite it’s tag as a tourist hotspot, a visit to Copacabana Beach must be ticked off the list.

Christ the Redeemer (Cristo Redentor)
Standing atop the Corcovado (which means ‘hunchback’ in Portuguese), Cristo Redentor gazes out over the sweeping city of Rio. The mountain rises straight up from the city, and at night the brightly lit 38m-high statue is visible from nearly every part of the city. The most popular way to reach the statue is to take the red train that departs every 30 minutes, and takes approximately 20 minutes to reach the top.

The Amazon Rainforest
Named after female warriors in Greek mythology, the Amazon rainforest is the world’s largest rainforest. Covering much of northwestern Brazil, the Amazon offers a mystical experience for those who visit. The rivers are roads in the Amazon, and the slow pace of a boat trip is a uniquely Amazonian experience, coupled with the phenomenal scenery a short trip to the Amazon is a must when visiting Brazil.

Taking the plunge and booking that trip to Brazil?
Here’s some important things to consider. Brazil’s high season coincides with the northern-hemisphere winter. It’s a hot, festive time and you can expect higher prices and minimum stays (typically four nights) during Carnaval. It’s particularly busy in Rio and popular beach destinations all along the coast. If you’re headed to Brazil for Carnival then February is the time to be there.  You definitely won’t be alone though so prepare for the crowds.

Aside from July, which is a school-holiday month, you’ll find lower prices and mild temperatures in the south. July to September are good months to visit the Amazon or Pantanal. The weather is warm and dry along the coast, though it can be chilly in the south. Prices and crowds are average, though Easter week draws crowds and high prices.

The Brazilian climate can vary greatly from region to region. The coastal cities of Rio de Janeiro, Recife and Salvador are hot for most of the year while plateau cities such as Sao Paulo, Brasilia and Belo Horizonte are milder. Rainy seasons occur from January to April in the north, April to July in the northeast and November to March in the Rio and São Paulo areas.

The Australian Smart Traveller official advice is to exercise a high degree of caution in Brazil, due to high levels of serious and violent crime. Pay close attention to your personal security at all times. Avoid shanty towns (or ‘favelas’) in the big cities due to the very real threat of crime. If you are attacked or robbed, do not resist.

Brazil is currently experiencing a yellow fever outbreak. Yellow fever is a potentially fatal viral disease transmitted by mosquitoes and is preventable by vaccination. In 2018, yellow fever cases were reported in the states of Sao Paulo, Minas Gerais, Rio de Janeiro, and the Federal District. Vaccinate yourself against yellow fever at least 10 days before travelling to Brazil. You may need to show a yellow fever vaccination certificate if you go to another country from Brazil or on arrival in Australia. A Yellow Fever vaccine is only available from government licensed clinics.

There is also widespread transmission of Zika virus in Brazil. The Australian Department of Health advises pregnant women to discuss any travel plans with their doctor and defer non-essential travel to affected areas.

Brazil is currently also experiencing a measles outbreak. Measles vaccinations are readily available and need to be considered prior to travel to ensure you are covered.  Malaria is a high risk throughout Brazil. There is a current outbreak in Bahia. Other insect-borne diseases (including dengue fever and chikungunya,) are also a risk to travellers, with a higher incidence during the wet seasons. Standard immunisations for food and water borne diseases such as hepatitis A, typhoid and influenza are advisable.

Prior to setting off on your adventures, make an appointment with the team at Travel Health Plus to make sure you are covered.